It’d be great if the U.S. Senate could act in line with what 90% of Americans want, but yesterday wasn’t the day. At least in Vermont we can be proud that both our Senators voted in favor of universal background checks and the “No Fly, No Buy” bill. Below is a powerful press release about Senator Leahy’s leadership on this issue, as well as a C-Span clip of his remarks yesterday in the Senate chamber. He has heard our voices clearly.

However, the takeaway from yesterday is not that progress is impossible. Instead, it means that the need for action at the state level is even more important. This is the time for us to rally behind our local candidates for state rep who support universal background checks and push back against those who don’t. You can donate your time or donate money to the cause, but choose one and show your commitment to making real progress on this issue.

To donate your time and be part of a volunteer team in support of candidates (with letter writing, helping with mailings, visibility events, or phone calling), click HERE.

Together, we will show the senators blocking basic gun reform that their inaction only drives us to take more action. They do NOT have the final say about gun laws in this country.

Here is the C-SPAN clip from yesterday in the Senate (Senator Leahy’s remarks start around 23:20).

And here is the press release about Senator Leahy:

One Week After Mass Shooting In Orlando, Leahy Urges Senators To Support Common Sense Legislation To Make Our Communities Safer

. . . On The Senate Floor, Leahy Responds To Vermont Teen’s Heartfelt Letter After The Orlando Massacre

WASHINGTON (Monday, June 20, 2016) – A Vermont teen recently penned an open letter urging Senator Leahy and all Senators to “do something. Something big,” in response to the mass shooting in Orlando that took 49 innocent lives.  The letter was written by a Vermont teenager named Ella Staats, and it appeared in the Vermont Digger as part of the Young Writers Project.

On Monday, Senator Patrick Leahy (D-Vt.) took to the Senate floor to respond to Ms. Staats and all Americans who are calling on Congress to reform the nation’s gun laws.

“I want you to know that I have been working for years to find practical solutions that will stop the gun violence that continues to touch every corner of our country.  But I bet that the last thing you want is a list of all the bills I have written or voted for but have not passed.  You want to know how we are going to overcome the well-funded opposition to passage of laws that will reduce gun violence,” Leahy said.

Leahy, who last week joined an unscheduled floor discussion led by Senate Democrats to force a debate and votes on gun safety issues, reiterated his call for action hours before the Senate was poised to consider legislation to close loopholes in the background check system and prevent terrorists from obtaining firearms.

“I hope the votes that I cast on your behalf tonight demonstrate that I hear you and I agree that we must act to prevent the next Orlando,” he said.  “Ella, thank you for doing that – for speaking out and for holding us accountable.”

In the wake of the tragic shooting in Newtown, Connecticut, Leahy convened three high profile hearings of the Judiciary Committee on the issue of preventing gun violence.  The committee also reported four common sense bills under Leahy’s leadership including legislation to improve and expand the background check system, ban assault weapons, improve school safety, and combat the practice of straw purchasing and illegal trafficking in firearms.

Earlier this year, Leahy reintroduced the bipartisan Stop Illegal Trafficking in Firearms Act to make clear that the straw purchasing and trafficking of firearms are federal crimes.  The legislation strengthens ineffective laws exploited by criminals including the San Bernardino shooters to obtain firearms through a straw purchaser.

“In the wake of mass gun violence, whether the victims are members of the LGBT community, African American church parishioners, first graders in an elementary school, college students, military service members or others in our community, we are called as Americans to come together in solidarity,” Leahy said.  “We must come together to enact real solutions that will prevent further acts of senseless violence.

It is especially important that your Senators hear that you support s.141.  Their vote is particlularly important in ensuring the success of this bill which will most likely be voted on tomorrow.  The opposition is making calls and we need to do the same today.

If you can send me an email that you have made the call that would be wonderful.  elissa@gunsensevt.org

I can’t tell you how thrilled I am to tell you that the Senate Judiciary Committee PASSED a gun violence prevention bill out of committee BY A UNANIMOUS VOTE IN SUPPORT!

Gun violence prevention has been untouchable at the statehouse for decades, and this is proof that times have changed. It has been your grassroots action that has gotten this issue on the table, and now it is moving forward despite opposition from the gun lobby. This is HISTORIC!!

We have such incredible momentum coming out of this committee vote, and it’s up to us to make sure we keep moving forward. The bill will get a number next week (it’s not called S. 31), and the debate and floor vote could happen as early as Thursday or else the following week. We’ll need to have supportive calls flooding into the statehouse for that, and since the gun lobby will likely do another robo-call to generate activity, we need to do the grassroots equivalent: a massive phone tree to call other supporters asking them to call their senators. To prepare for this, folks are coming together at locations all across the state this weekend to start making phone calls. If you haven’t yet signed up to help, contact Elissa, and she’ll put you in touch with the phone bank organizer in your area.

Our voices are making a huge difference, and we must continue to ensure that the call for common sense comes through loud and clear.

Together we are DOING this!!
Ann

P.S. Here is the first news report out about the bill, and I’m sure others will be coming out shortly. 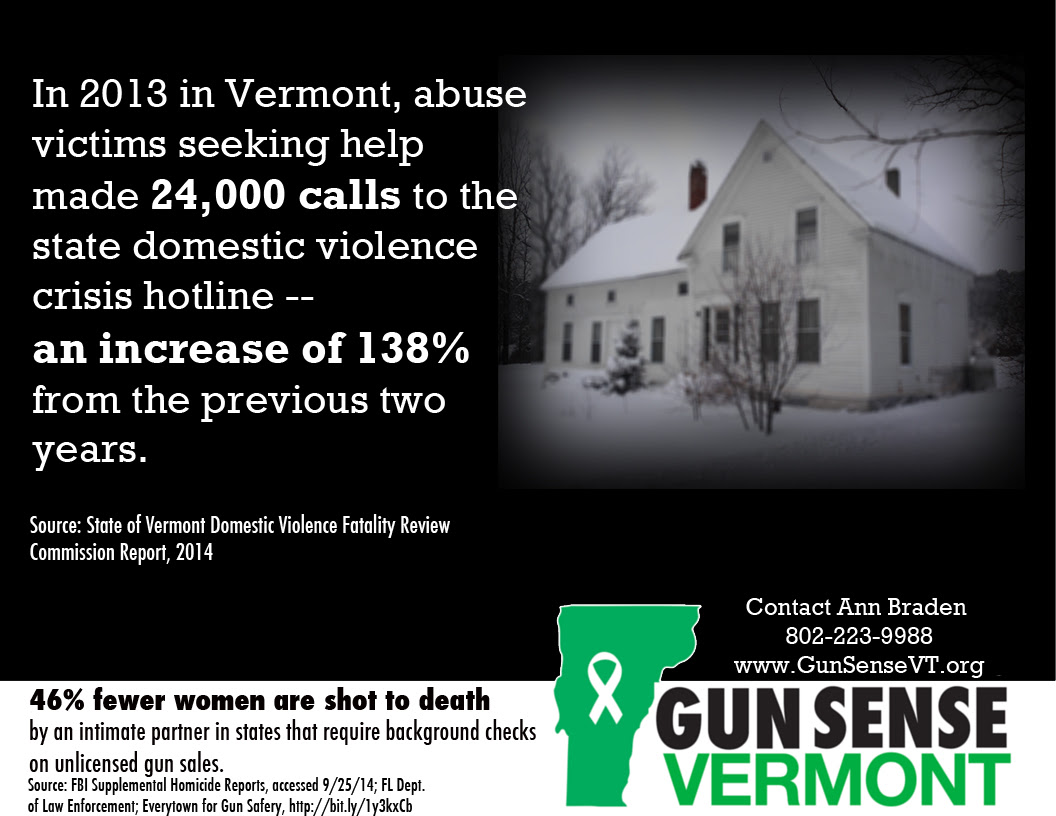 If you didn’t see the Governor’s comments on the news last night, this clip is worth watching. From WCAX: He says voters sent him a message to act on property taxes and education costs, not gun laws or picking the state dog and vegetable. ‘I just don’t know very many Vermonters who come up to me and say, ‘You know governor, all of my problems are because Vermont’s gun laws aren’t serving us well.’ It’s not something I’m getting; so let’s focus on the things Vermonters asked us to get done.”

The phone number at the Governor’s office is (802) 828-3333. Let’s let Governor Shumlin know that those 12,000 petition signatures we delivered two weeks ago were actual Vermonters asking him to take action on this issue!

And thank you to all of you who stepped up to share yesterday’s fact in support of criminal background checks. Lawmakers are appreciative of your efforts and saying “Please encourage more to write,” — and given the rhetoric used at last night anti-criminal background check rally it’s essential that we keep making our voices heard!

In 2013 in Vermont, abuse victims seeking help made 24,000 calls to the state domestic violence crisis hotline — an increase of 138% over the previous two years.

On behalf of these families we can’t afford to ignore our domestic violence problem and allow abusers to have easy access to guns. Please share this fact with your lawmakers right now. (Direct links to lawmaker e-mail addresses are below.)

Please drop us a quick e-mail letting us know that you’ve reached out to your lawmakers.

P.S. Here is the VTDigger article about yesterday’s rally at the statehouse against criminal background checks.

Dear Friends,
I’m thrilled to announce that S. 31 has been officially introduced in the Senate. That means that it’s crucial that right now we all send a quick, personal e-mail to our lawmakers letting them know that we support it. (Senators’ and representatives’ e-mails are here.) This bill has three key parts, like three legs of a stool that work together to help keep guns out of the wrong hands:

If you’re interested in reading the bill in its entirely, you can see it here.

It is a huge accomplishment to have gotten this far, and looking ahead our work is cut out for us. While there area number of lawmakers who are fully supportive of this bill, there are many who are:

1. Not sure Vermont has a problem that this bill would address.
2. Wary that their constituents might not be supportive since they often only hear from the voices against any reform.

It’s up to US to help lawmakers see that this bill is necessary to help address our domestic violence problem and prevent other dangerous individuals from having easy access AND that their constituents support it!

This will require us all to make a commitment to reach out to our lawmakers on an ongoing basis. If they hear our polite and persistent collective voices day after day, democracy will work the way it should, and a bill that has 81% of Vermonters in support will get passed.

The First Step: E-mail your lawmakers right now to show your support of S. 31 and encourage them to watch our new ad that highlights gun owners standing up for background checks.
To help you do this:

The Next Step: On Monday we’re going to begin a two-week Fact-of-the-Day campaign in which we’ll focus on one key fact each day to underscore why this legislation is necessary. We’ll send you a quick e-mail in the morning with the daily fact, and then all you need to do is turn around and e-mail it to your lawmakers. The fact itself will be powerful, but it will be even more powerful coming from a constituent.

Quick, personal e-mails only take a few minutes each day, but they could EASILY be the determining factor that will make this bill successful.

You have the power to make the difference!

Together we can do this!
Ann

P.S. The daily fact e-mails are designed to make it easy for you to stay informed and speak up. However, if you don’t want to receive these emails and do want to continue to receive general GunSenseVT emails, please just e-mail us, and we’ll remove you from this specific list. Thanks!

Live in “the virtue of that life and power that takes away the occasion for all wars.”

This applies to all violence including gun violence. Violence is a reflection of the ills of society. We challenge ourselves and others to look at the depth of this issue so we can address the heart of the matter.

Ann Braden from GunSense VT joined a group of Friends/friends at Putney Friends Meeting on January 18th to share the story of her work in founding this organization. Below is a link to a video explaining what they are trying to accomplish here in Vermont.